What can we learn from a practical exercise of simple questions and closure?

As an exercise I initiated in order to stimulate dialogue about the nature of how affairs happen and are governed here most notably the sequence below, I introduced a simple question with the following post for empirical and demonstrative purposes:

(to provide an example related to:) 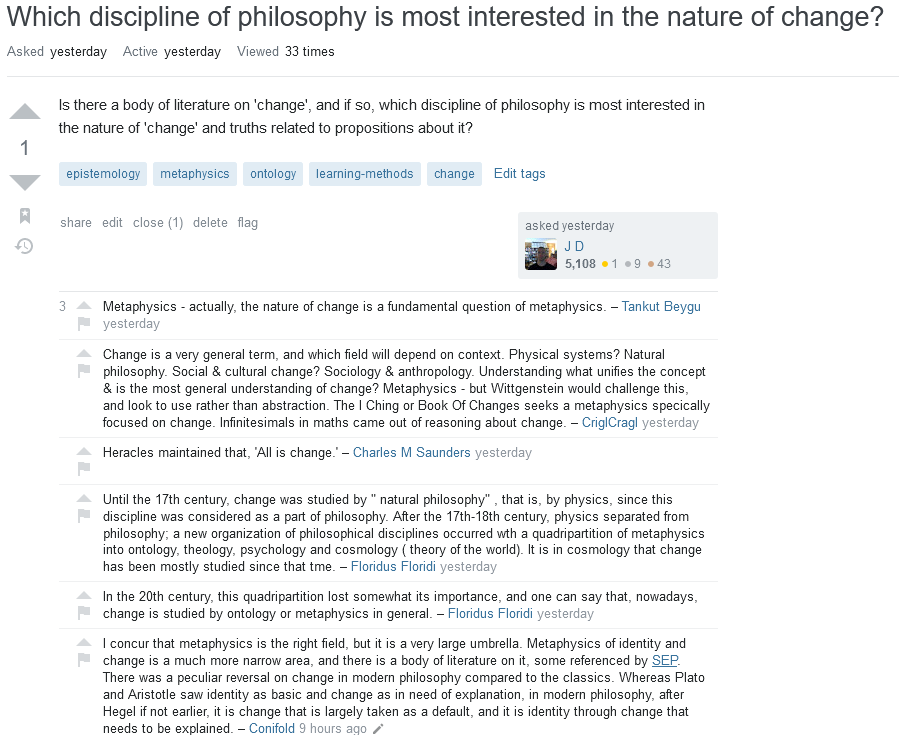 The obvious summary is we have a question that a person of average philosophical knowledge might ask. It's sufficiently ambiguous because most people who might use our site (read as draw traffic on behalf of SE), certainly answerable by both anyone on the philosopher-SME spectrum, and was selected partially on the grounds that there didn't seem to be a related question in the PhilSE knowledge base.

We have 1 upvote, one vote for closure, 6 responses, the first of which received 3 additional upvotes, and precisely 0 answers. Perhaps this question will be answered, and perhaps it won't be answered in the way intended by the designers of this technical forum. Perhaps I'll answer it.

I make the following claims:

We see some typical results.

Not the answer you're looking for? Browse other questions tagged discussion site-evaluation site-promotion governance .

This site is for discussion about Philosophy Stack Exchange. You must have an account there to participate.

4
What steps can we take to improve accessibility and friendliness?
14
Reflecting on usage patterns on Philosophy.SE
15
Subjective Questions: Deciding what we want as a community
5
What can be done to help users improve their questions?
9
Friends, are we currently deleting too many questions and answers?
6
Friends, Are We Not Philosophers: Is This Place a Bazaar or a Cathedral?
0
Friends, what exactly is the difference between 'being a philosopher' and 'being a philosophy SME'?