Why should Fitch style logic questions be off-topic?

I've noticed a lot of questions about Fitch style logic getting off-topic close votes. But I couldn't see this decision that they're off-topic in Meta. A couple of examples:

Should these questions be off-topic? If you think they should, can you please explain your reasoning, so that we have something to refer to?

Here are my 2c on this: often users asking these ask for proofs using a specific set of rules "allowed" in a specific book or implemented in a piece of software. The catch is that answerers will most often than not not have access to that precise book or software.

Questions seldom if ever post the exact table of rules allowed together with the question.

The problems are usually extremely mechanical, in the sense that the main difficulty is getting over the lack of (some) derived rules in whatever book/software is used. (Here's one such a concrete discussion on Math SE.)

They generally have little value to anyone besides the question asker, although I can see that someone unfamiliar with such matters may derive some benefit from seeing examples worked out... however the matter is again that from what I've seen recently answers to such questions merely post hints, so it's not entirely clear these are 100% illuminating for someone who struggles with a particular system.

Also, there exist some on-line provers that do that "teaching" job nowadays; e.g. (But the proofs it produces may not be accepted by other checkers, again for somewhat silly/obscure [derived] rules reasons.)

Honorable mention here for those looking; there are some tableau provers on-line as well (and quite a few more off-line). With a minimum of skill on can translate tableau proofs to Fitch.

To illustrate my point here a little bit; here's a Fitch proof, which actually does use some derived rules (De Morgan's--otherwise it would be even longer): 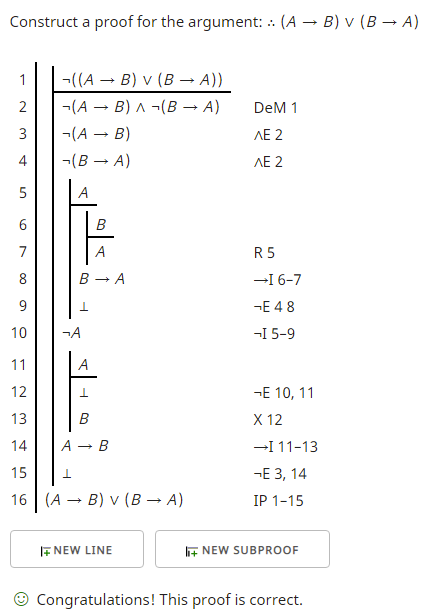 compared to a tableau proof 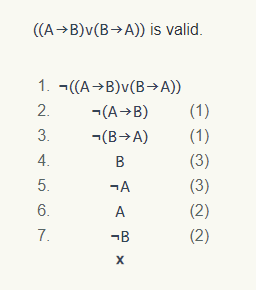 (To not use De Morgan's in the Fitch proof you have to do stuff like:

The rest is omitted for sanity preservation purposes.)

Sure, it's perhaps insightful to see e.g. associativity proven by Fitch... but it's also damn painful and the whole point of math in general is to produce intermediate results (like derived rules) you can use/reuse. 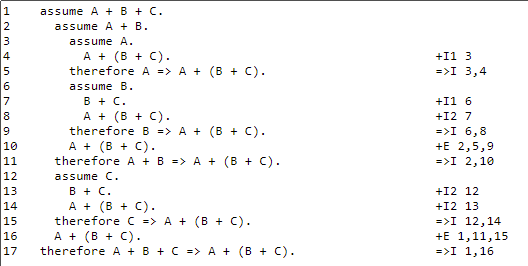 If someone really expects an explicit proof of the latter (as one question recently did, albeit implicitly)... I'm not sure that's too helpful/possible to answer with mere hints. And it's not clear if machine-proof answers would be desirable/on-topic.

N.B. the reasons we don't get any questions like that about tableau ... somewhat self-evident: 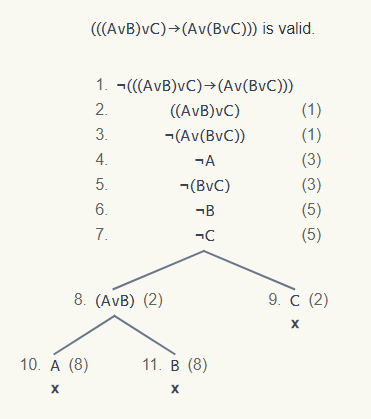 Not the answer you're looking for? Browse other questions tagged discussion allowed-topics .

6
Is this formal logic topic more appropriate at math.stackexchange?

13
What is considered off topic?
8
Are questions about literature on-topic?
6
"What fallacy is this?" - on topic or off topic?
1
Should we have some rules about mathematical logic problems?
3
'Test My Theory' style questions
2
Why is fitch so popular?
6
Is this formal logic topic more appropriate at math.stackexchange?