Do we want a custom "sensitive topic" notice?

Some sites have a custom notice to remind people that the topic is sensitive, that they should be nice and that comments are to improve a post, not for debates. The notice was introduced here and can be seen in action e.g. here; it looks like this:

We recently had several questions, mostly religion-related, ending up in the Hot Network Question list, which always triggers a lot of traffic from across the network but unfortunately also lead to long comment threads in some occasions (cf. this meta post).

Do people feel like this custom notice can help? Let's discuss this for a bit and once the community has decided we can ask the SE team to enable the notice.

I did some poking around and I'm going to re-use The Workplace and Academia versions. I do like the links version, but for the purposes of testing and collecting statistics, I'd like to keep it the same. This is the sort of thing that could be promoted to other parts of the network or could be the basis for a new feature. It might be useful to add the link to the help center, but the link to this site's meta wouldn't work so well on other sites.

We can get a rough idea of how effective these notices are by comparing the number of comments before the notice was added to during the time the notice was active. (Unless a moderator removes the notice, it sticks around for a week.) On The Workplace:

While that is encouraging, we expect commenting to decrease over time and it's not too surprising that there are fewer comments after notices are added. Maybe this is a case of closing the barn door after the horses have already run off. To get a better idea, we can graph the number of comments by age (in hours): 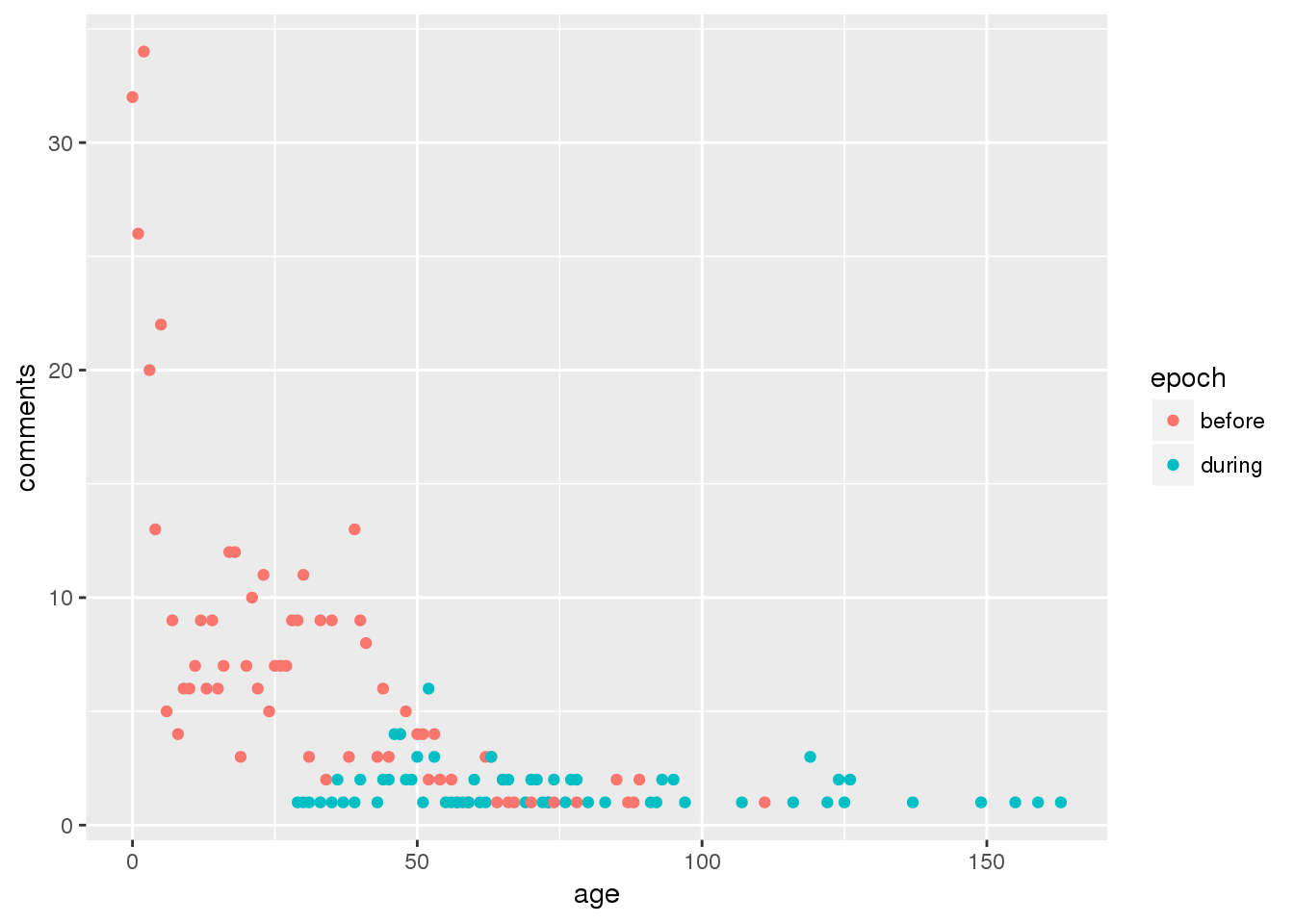 I'm just looking at The Workplace for this graph, but Academia has similar results. The encouraging thing is that for the same ages, red dots (pre-notice) tend to have more comments than blue dots (post-notice). Without building a model of comment by age, I'd tentatively say the post notices work. I'm also not taking into account other moderator actions, such as purging comments or moving them to chat.

I, personally, am very much in favour of this possibility.

It has become a common trope that we have to heavily moderate comments and answers, sometimes simply because of people becoming involved, other times because of them going off the rails.

This is often linked to the nature of the question itself. In a sense, this is a self-reinforcing process: People like to get involved in controversial topics, this makes them interested in and looking into controversial questions, which lets them be on the Hot Network Questions bar, leading to more people getting aware of and interested in the controversial question, leading to even more problematic answers and comments. Protecting the questions has proven to be a pitifully useless tool for preventing this.

Also, we often have people not understanding why we act the way we do in this kind of question, leading to quite a lot of flags and meta questions like this and that.

Adding this note would remind people of the rules in place and possibly prevent an excess of comments (and answers), but definitely, make clear the playing rules the moderators are following when it happens. In other words, it would be a nice handy tool for not being forced to repeat the rules over and over again and remind everyone about the purpose of this site.

If anything, a link to this post for comments (because it cites the relevant part and links to the original source) and maybe to the help center directly for answers could further help and legitimise the notice itself and actions taken according to it by pointing out the rules and where they are to be found.

I would argue for using the links as follows, to highlight the ONLY parts and establish the desired effect, pointing out that we do not have to bother arguing why every time we take action in that question thread:

One last comment, as this might be misunderstood considering recent discussions: Those rules are in fact effective for all questions, comments, and answers. All the time. It's just that we can give more leeway in non-controversial questions. Nobody likes overly pedantic mods (or so it seems).

Welcome!
This site is for discussion about Philosophy Stack Exchange. You must have an account there to participate.
Help
Visit chat

6
Why are comments not for discussion?
2
Reason comment was removed

6
"Not in comments please" -- How to handle interesting discussions
15
Subjective Questions: Deciding what we want as a community
2
How far can we go with editing a (closed) post?
5
2016 Moderator Election Q&A - Question Collection
5
What can we do to use chat for community-building?
4
Should we edit the "on topic" site of the help center?
5
Friends, Are We Not Philosophers: Is This Place a Bazaar or a Cathedral?